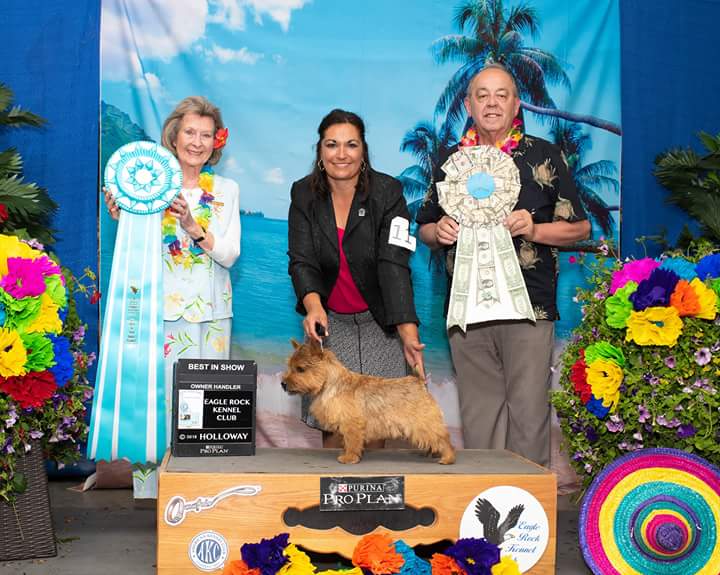 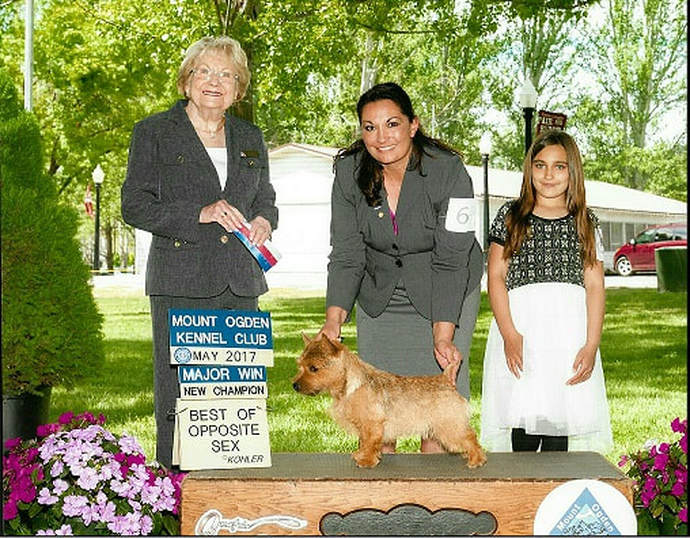 New Champion! CH. ITSY BITSY KING OF THE WILD THINGS (Max) earned his AKC Championship with 4 majors and 4 singles in just 2 weekends of shows. Max became a champion at the young age of 13 months 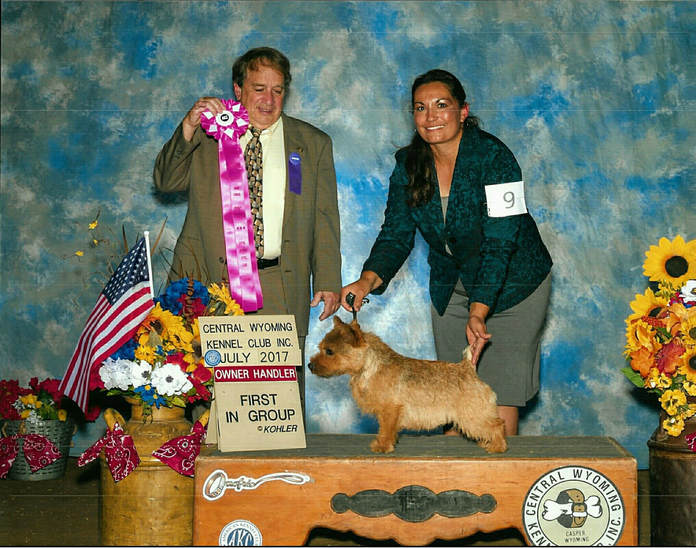 CH. ITSY BITSY KING OF THE WILD THINGS (Max) won 2 Best of Breeds in Casper Wy for two 5 point majors towards his Grand Championship, as well as an OWNER HANDLED Group 1, and OWNER HANDLED RESERVE BEST IN SHOW. This was only Max's 3rd show. We are so proud of Max. Thank you to Tonnie and Jerry Willrich for letting Max share our lives.
Ch. Itsy Bitsy Texas Playboy. Tex is our adult male, and my best friend. A big thank you to Darcy Bartholomay of Full Throttle Terriers for her expert handling and grooming help, and the final major needed to complete his AKC Championship! Also a big thank you to Trudy Haines for helping him get his first major, in Palm Springs, California (2012). Tex is co-owned and bred by Tonnie and Jerry Willrich.

Tex is very intelligent and learns quickly! He passes that intelligence on to his puppies. He likes to hunt for mice as well, and will look for them on command. Tex is in every way a farm dog, he likes to ride in the tractor or semi truck, go irrigating or feed the cows with us. He's always ready to go, and will wait by the door when he knows we're going somewhere, just so we don't forget to take him. Tex sleeps with our son, they are the best of friends, he tucks our youngest daughter in bed with a lick on the cheek. Tex doesn't mark in the house, even though he's intact, he knows that's not allowed here and respects it.
Tex participated in his first barn hunt and earned a 1st place and a 2nd place (small dog) and has earned his barn hunt title! This was very fun for both of us and we enjoyed every second of it! We will continue with his barn hunt title later in the summer or fall.

OFA test results:
Hips: Good
Patellas: Normal
Eyes: Normal
CHIC #83175
http://www.offa.org/display.html?appnum=1478264#animal
PENNHIP results are available for hips and patellas, please ask if you would like to see them. 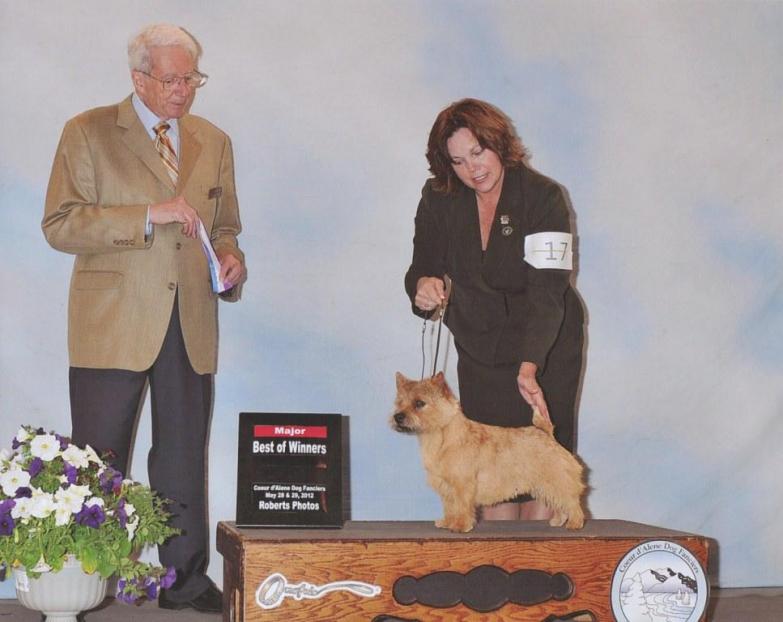 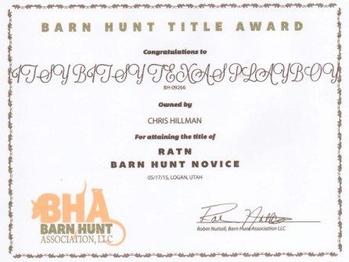 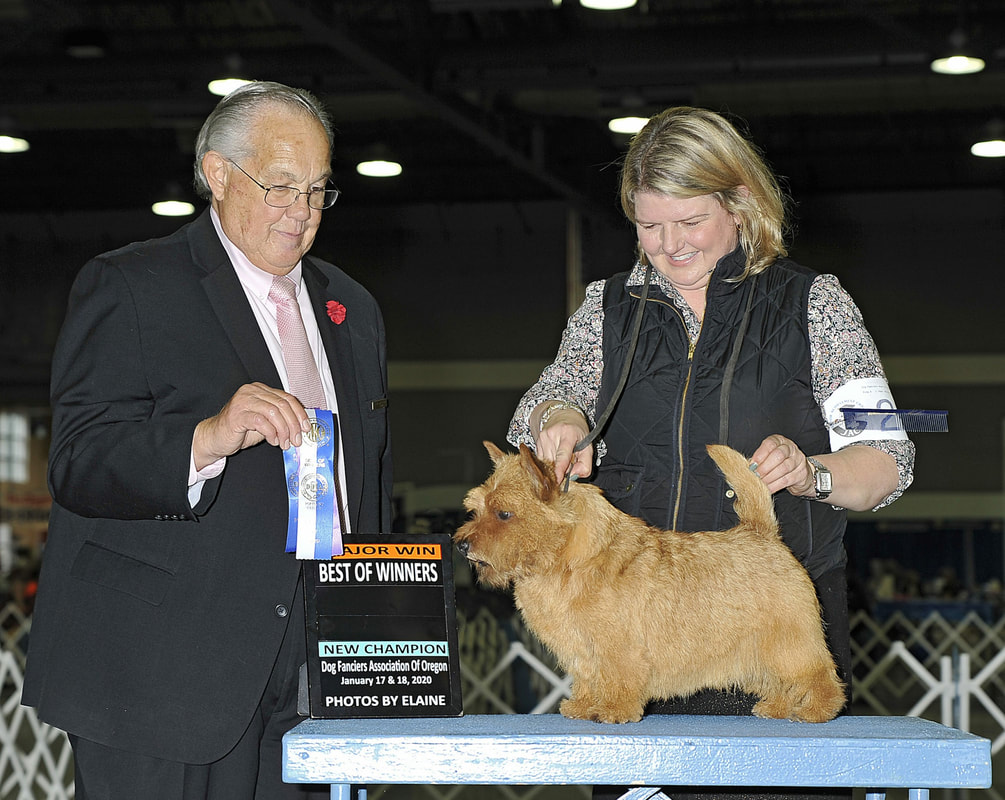 CH. RAGUS ROYAL TWEED BRAIT NOUZ - Tweed. Tweed is an English import from the famed RAGUS kennel in England. He is an international Champion and has had an extensive and succesful show career abroad. He is a champion in most of the Eurooean countries.. Tweed is a gentleman in every way. He is very good with the other boys and younger dogs. Tweed loves to play fetch with his favorite toys and go for walks. Tweed is co-owned with my good friend Lynn Marshall, and was expertly groomed and shown by Amy Rutherford. 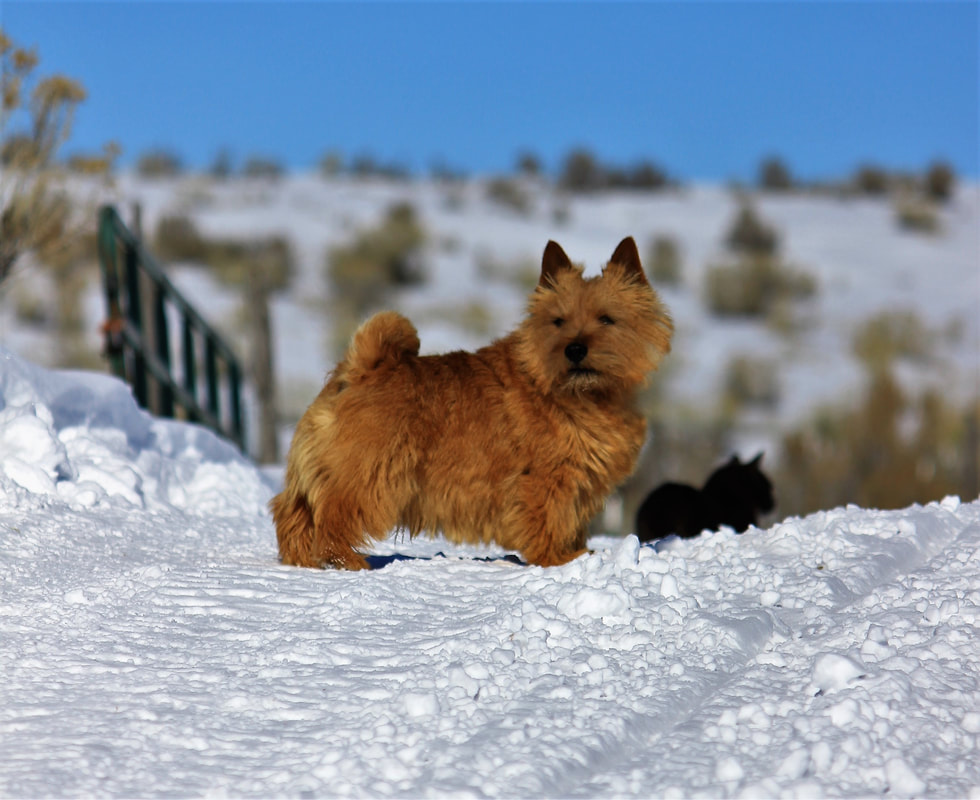 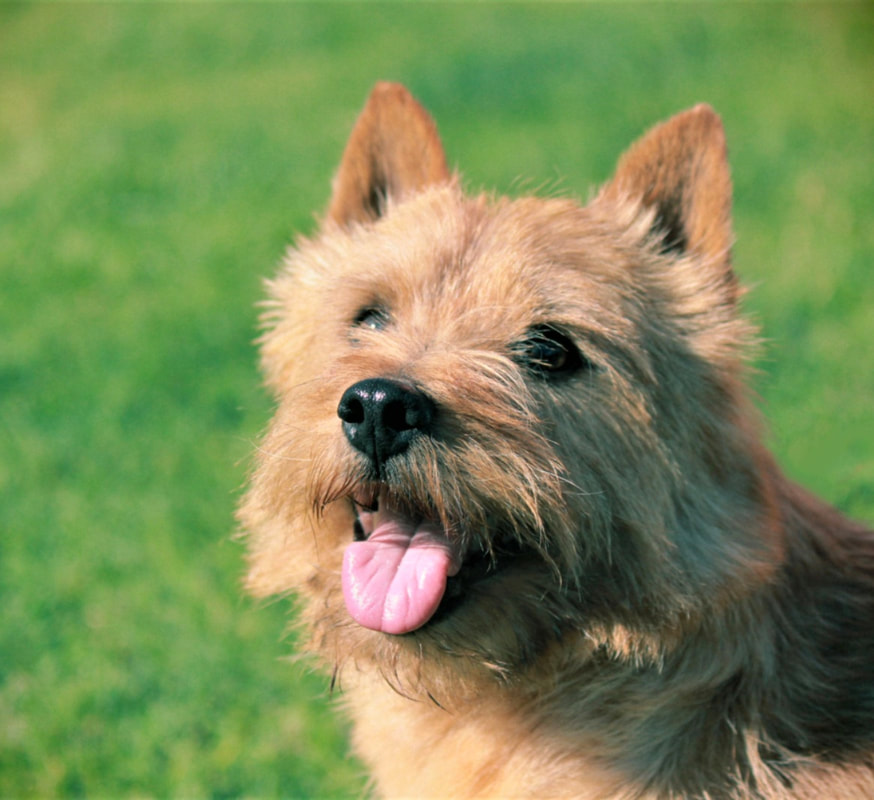 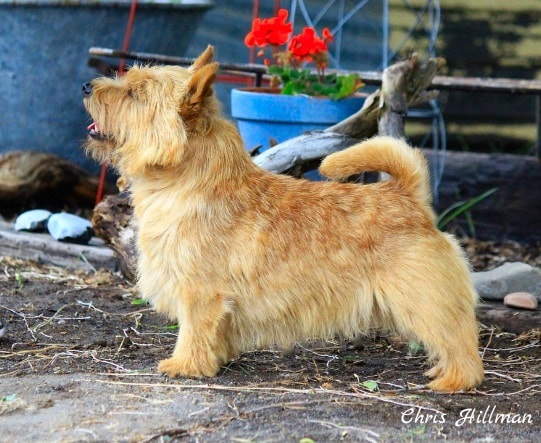 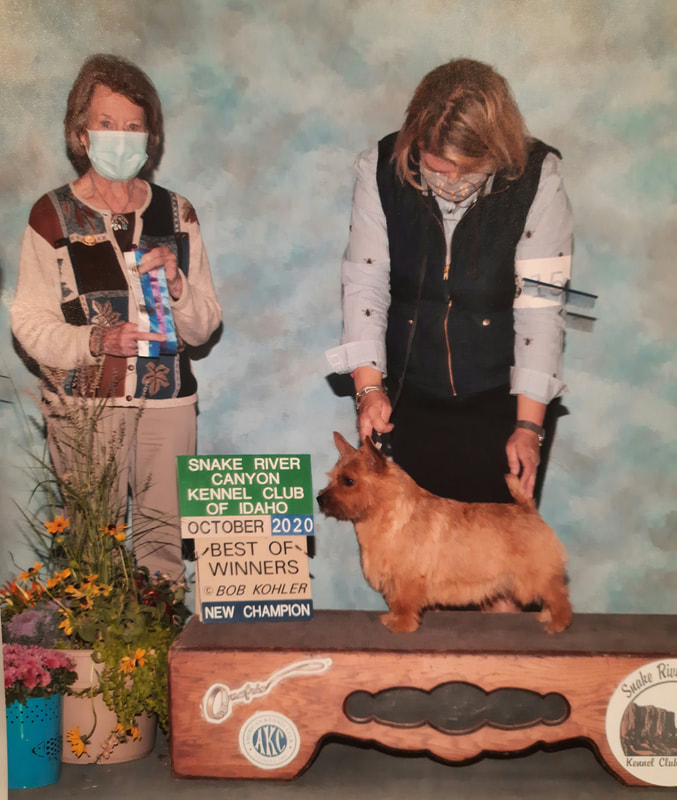 CH SHONLEH WESTWINDS RED WING -Sam
Sam is a handsome boy sired by GRCH Michans Mick Like A Rollingstone. Mick has produced many AKC Champions and his kids have produced Champions as well. I am fortunate to be able to add Sam to our breeding program! Sam was shown exclusively by Amy Rutherford. 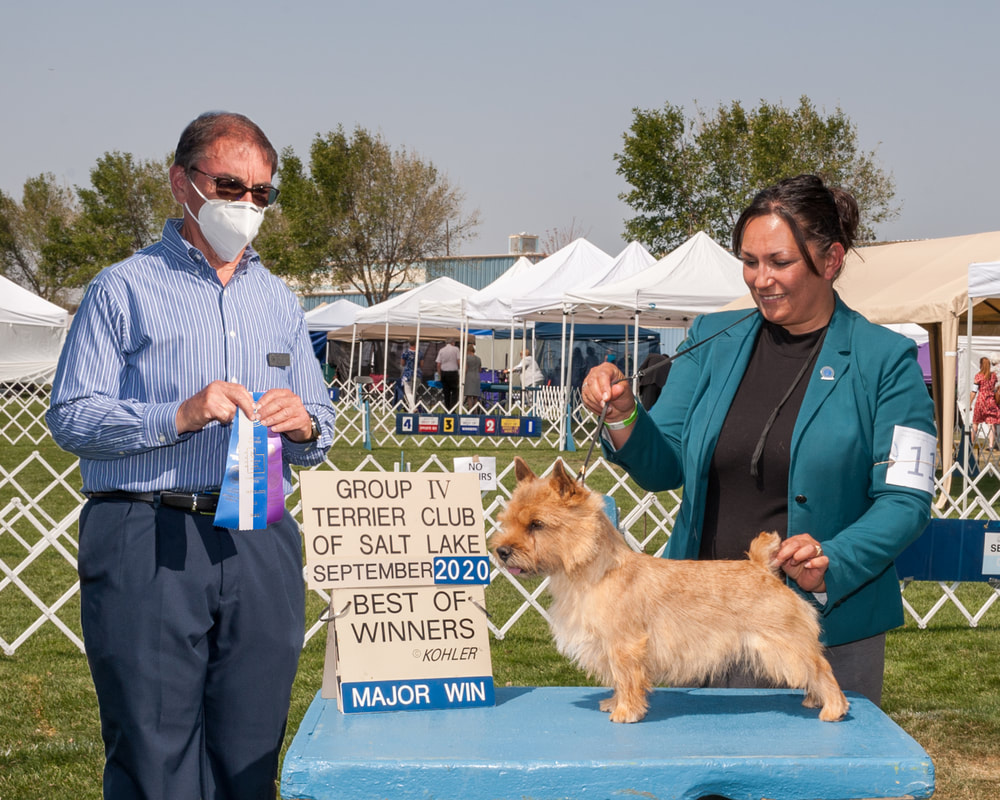 SVELIZ HEARTS ARE GONNA ROLL AT FANTASIA -Jake- is our Russian import from my very good friend Svetlana Elizarova. Jake is a mix of American lines , Finnish lines and old Canadian lines. Jake loves to swimm he is part fish! Jake loves to show and is a dream in the the ring as well as at home. Jake is a single point away from his Championship and will continue his show career in 2021. 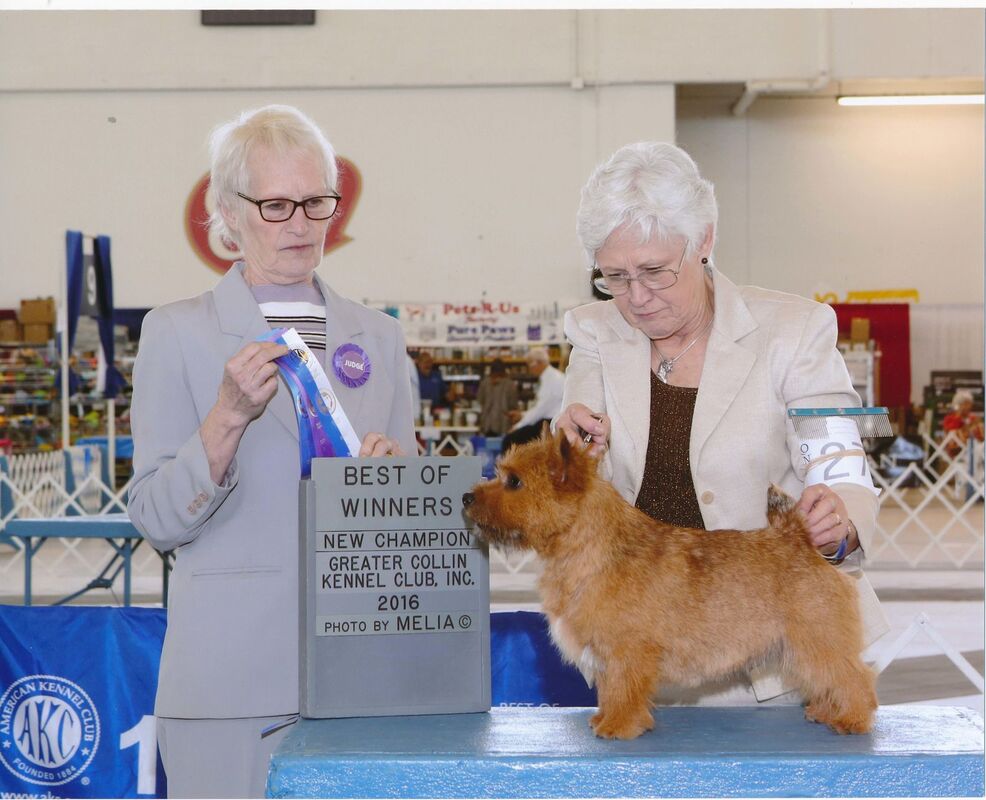 CH. COVENTRY'S STRAIGHT DEAL AT LAPRELE - Yogi. Yogi is a sweet boy, who loves his people. He loves to go for walks or throw his chewies around and chase them. Yogi is co-owned with Edna Grabow of Laprele Norwich
Ch. Thunderwood's One For The Road - Uno
A huge thank you to Uno's breeder, Kristin Conlan, for entrusting us with this very special boy. Uno has been such a pleasure to raise. Uno is very kind hearted boy, and has been very easy to train as he loves to please. Uno loves to fetch his smoosh ball and sticks and play with the other dogs and likes the water. His absolute favorite is chasing sticks and helping me garden (he pulls weeds for me..sometimes flowers too!) Uno finished his championship with style! His second show out he earned his first point by winning a Best of Breed over an already finished Champion and a class bitch. His first show out in a year was Mount Ogden Kennel Club, where he earned a 5 point major over specialty winners. Two weeks later at the Snake River Kennel Club he earned two 3 point majors, and went on to the Eagle Rock Kennel Club show (our local club!) and won a 4 point major, a Best of Breed (under esteemed Terrier judge Wood Wornall!), Best of Opposite Sex and a select. He is now well on his way to his Grand Championship, and we are looking forward to his career as a Best of Breed dog! His Championship finished faster than we received his first win picture, so more pictures will be added as they come in the mail. Uno also won a Best of Breed in Utah, over the #1 ranked Norwich in the United States, as well as the #10 ranked Norwich. Uno has taught me that good things come to those who wait, and also patience and perseverance, both of which I normally have, but when I see a puppy or young dog as gorgeous as he is, of course I want to get started right away! Uno is the very first dog, that I have put every single point on myself. I did send him with my friend and handler, but Uno had his own ideas! Uno was not ready to show as a puppy, and I am glad I had to wait until he was a little older. Lesson learned! Thank you baby!
A big thank you to all the judges who recognized and appreciate the quality of this fine young dog:
Bart Miller
Jo Anne Dutton
Alvin Krause
Peggy Lloyd
Wood Wornall
Fred Stephens
Vandra Huber
OFFA hips: Good http://www.offa.org/display.html?appnum=1703468#animal
OFFA patellas good
Uno is retired 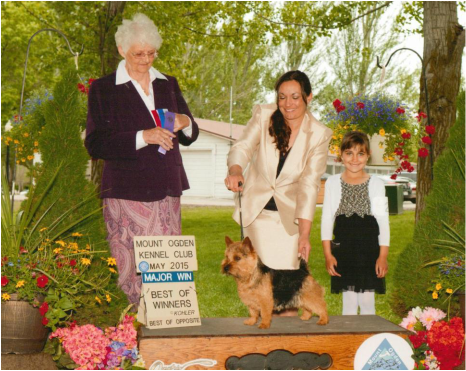 Ch. Thunderwood's One for the Road 1st major win picture. He is now an AKC Champion! Uno won a 5 point major at the Mount Ogden Kennel Club, two 3 point majors at the Snake River Kennel Club show, and another 4 point major at the Eagle Rock Kennel Club show, he then went on to win a Best of Breed the next day, over ranked specials, and went Best of Opposite Sex to one of the top bitches in the U.S.! Uno also earned a select placement, and is well on his way to being a Grand Champion. We are very pleased with the last 3 weeks and will treasure these wins forever! 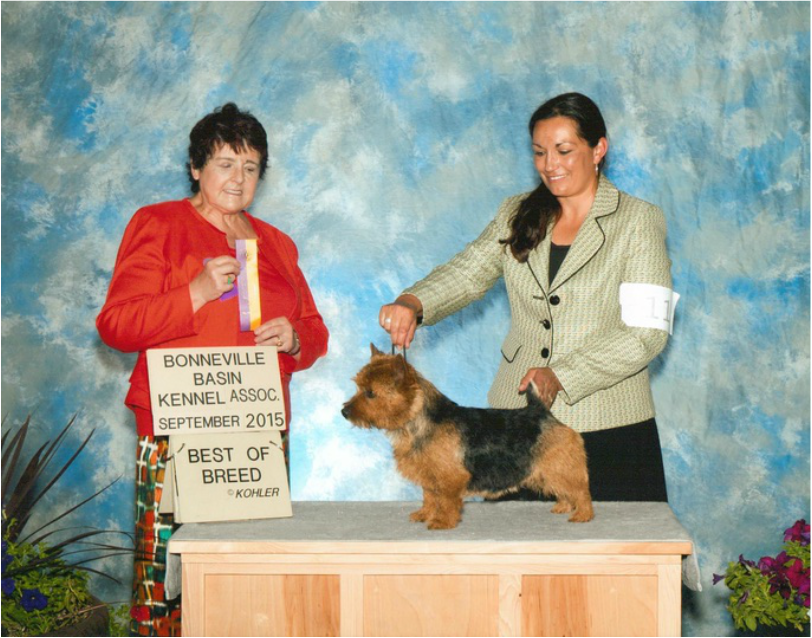 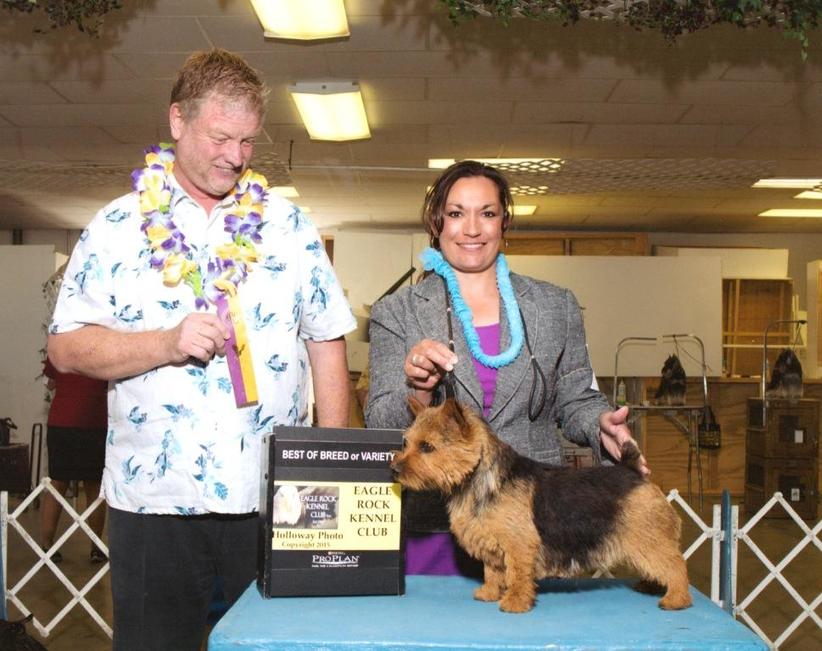 Ch. Thunderwood's One For The Road - Best of Breed 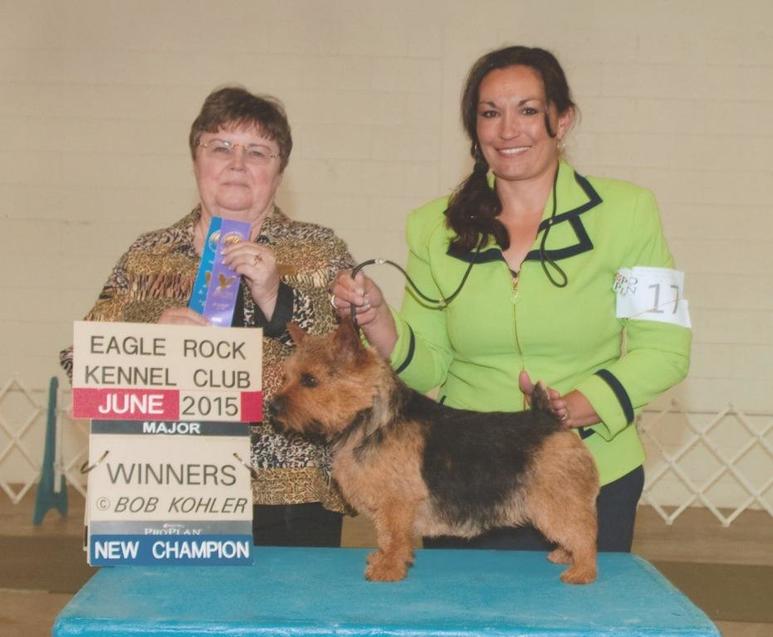 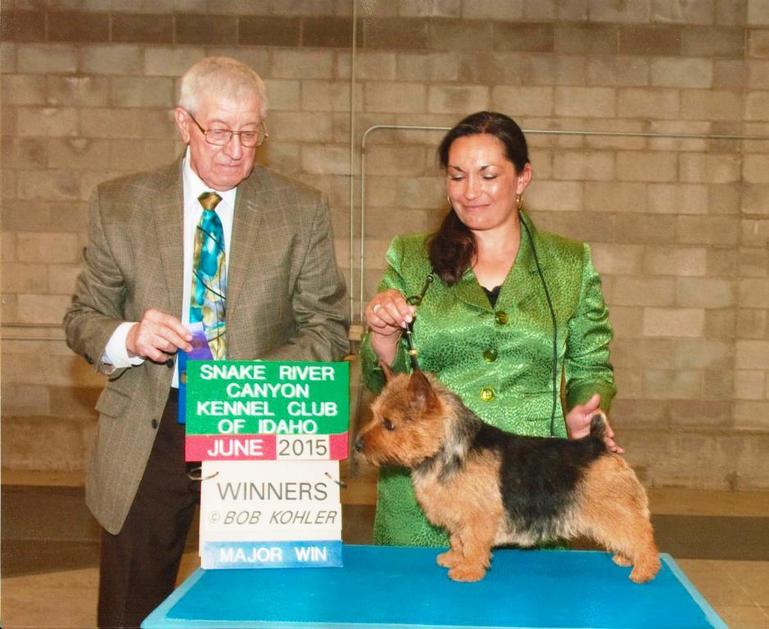 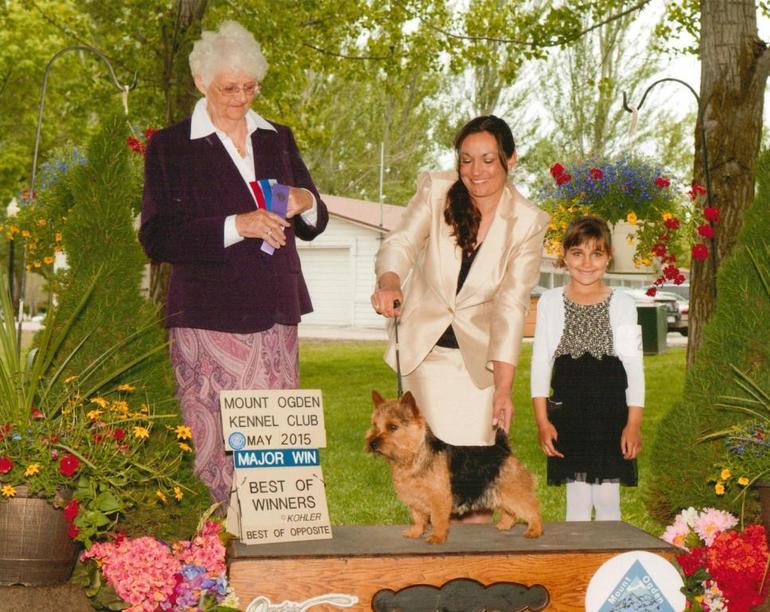 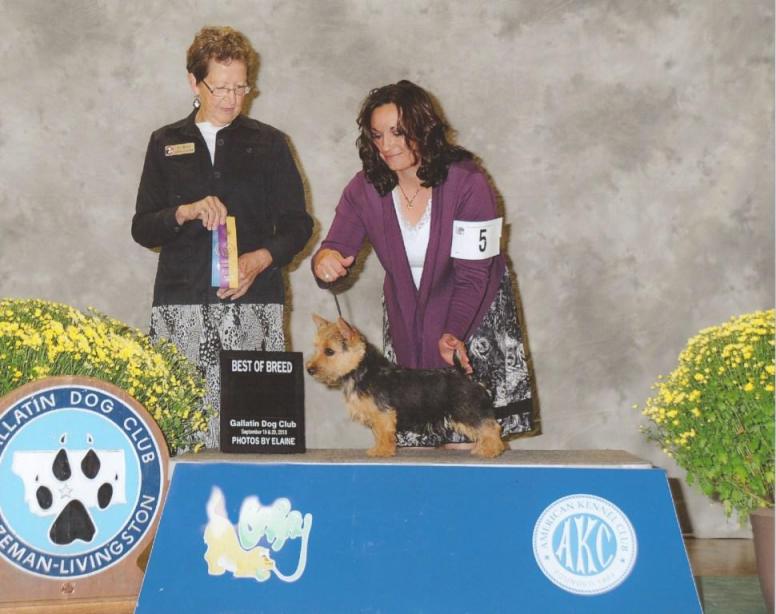 Uno's first Best of Breed at 7 months of age! 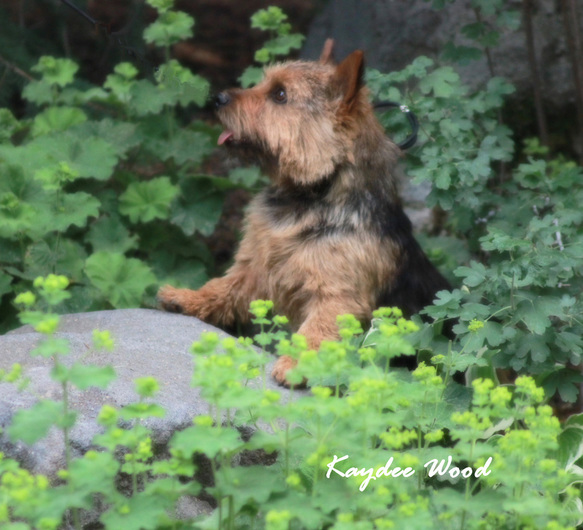 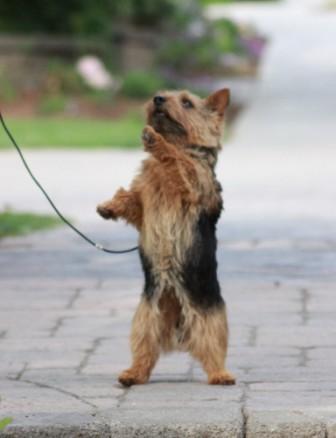 Uno giving a high 5! This is our game in the ring to take his mind off what's going on around him.

Grand Ch. Laprele Double Diamond (Duece)
Duece is a doll, always up, and ready to go. He is very happy and outgoing, and will do whatever you ask of him. Duece has been an exhibitors dream, winning two 5 point majors from the 6-9 month puppy class under Terrier judges. Duece went on to win 2 Best of Breeds from the 6-9 month class. We kept him home from October to May, wanting to finish him as an older more mature puppy. He did it in style, at the Casper Wyoming shows. Duece went on to win 2 Best of Opposite Sex wins and some select wins as well, and earned his Grand Championship from 6 days of shows. Thank you to Edna Grabow, of Laprele Norwich Terriers, for breeding Duece and entrusting him to us, and also for putting the last 2 points on him for his Championship, from the Bred by Exhibitor class.

Deuce is retired and lives a wonderful life in California 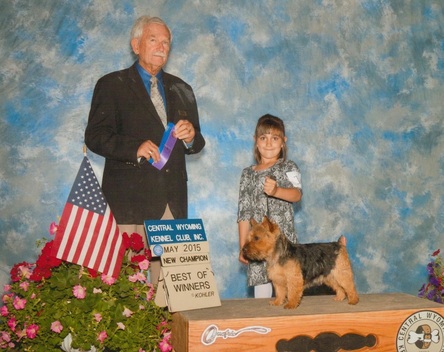 Ch. Laprele Double Diamond with our 6 year old daughter Paige. This was her first time winning and the win gave Duece 2 extra points. It was fun to watch! 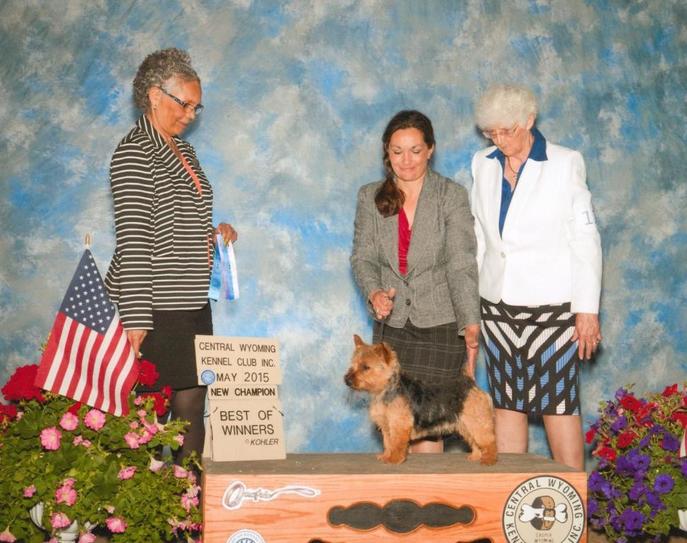 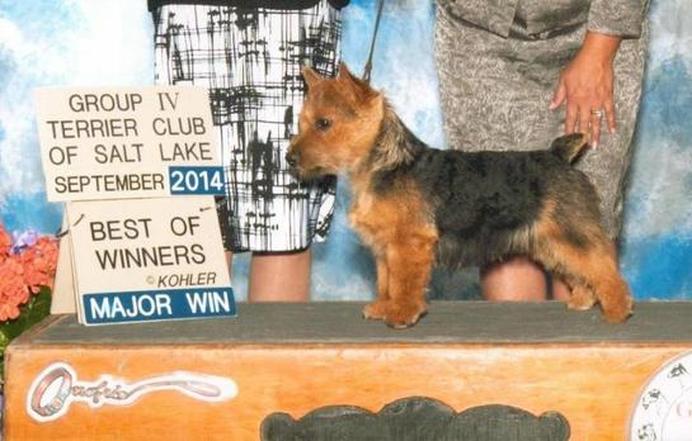 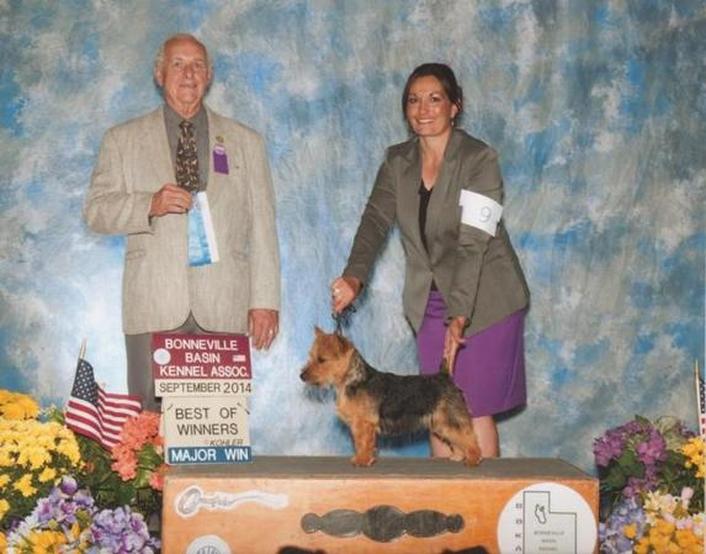 Dueces second 5 point major from the 6-9 month puppy class, awarded by Robert Shreve, shown by me. 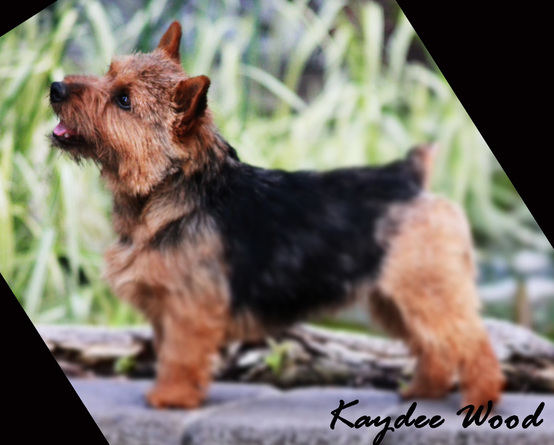 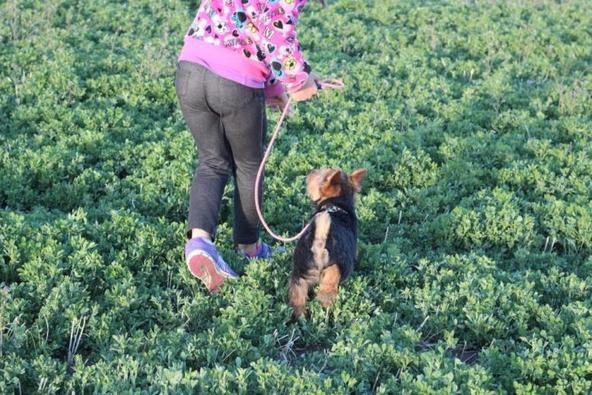