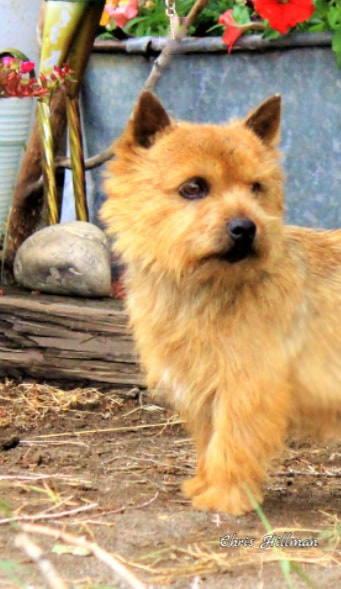 CH TNT'S GOING BALISTIC - Gabby. Gabby is a very outgoing, athletic, happy little girl. Gabby is always jumping on things or racing around. She is a niece to Max, they both have the happy always smilimg disposition. 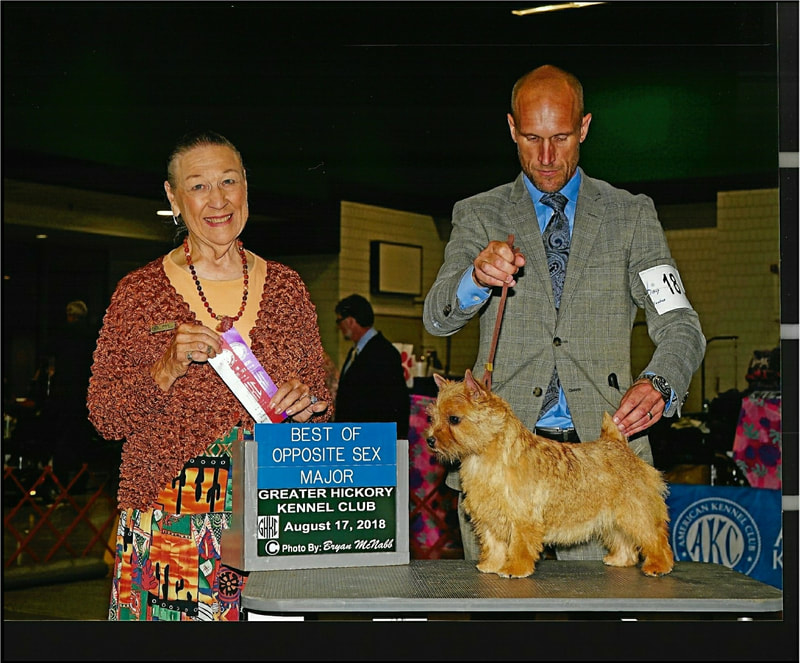 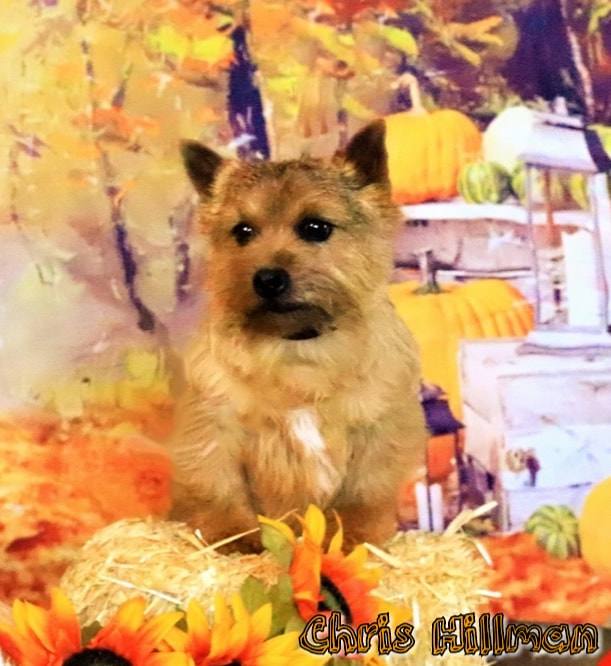 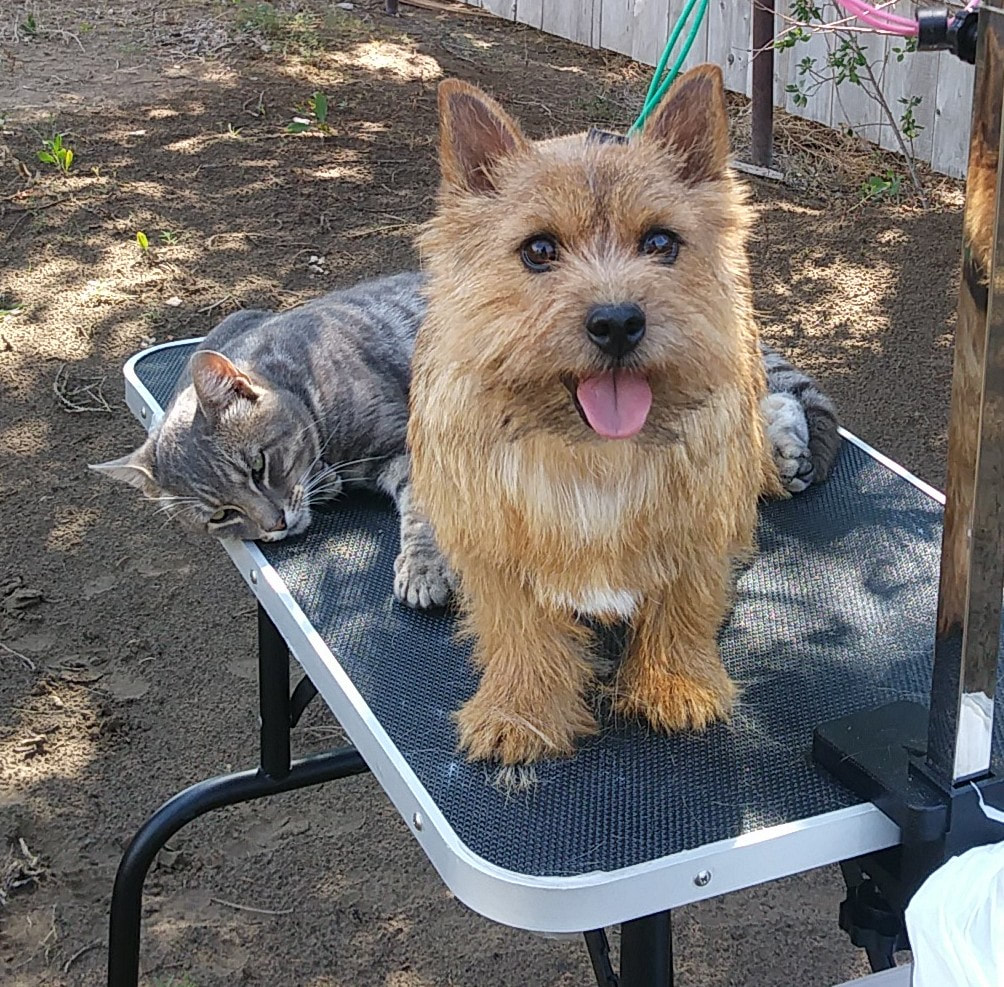 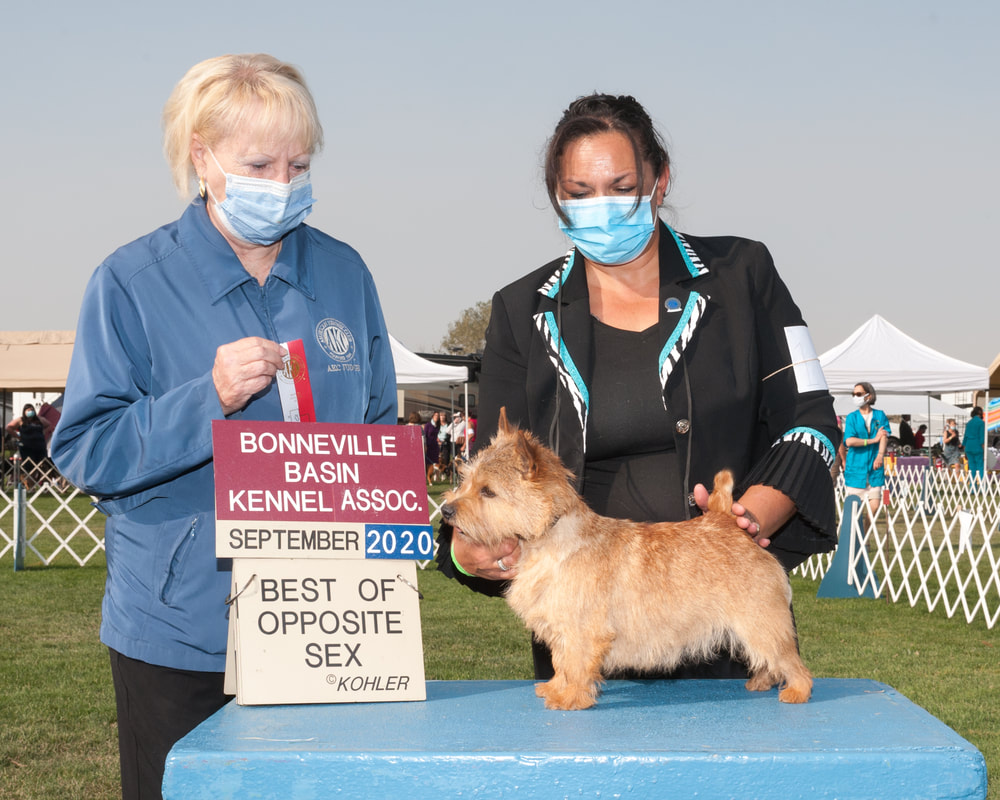 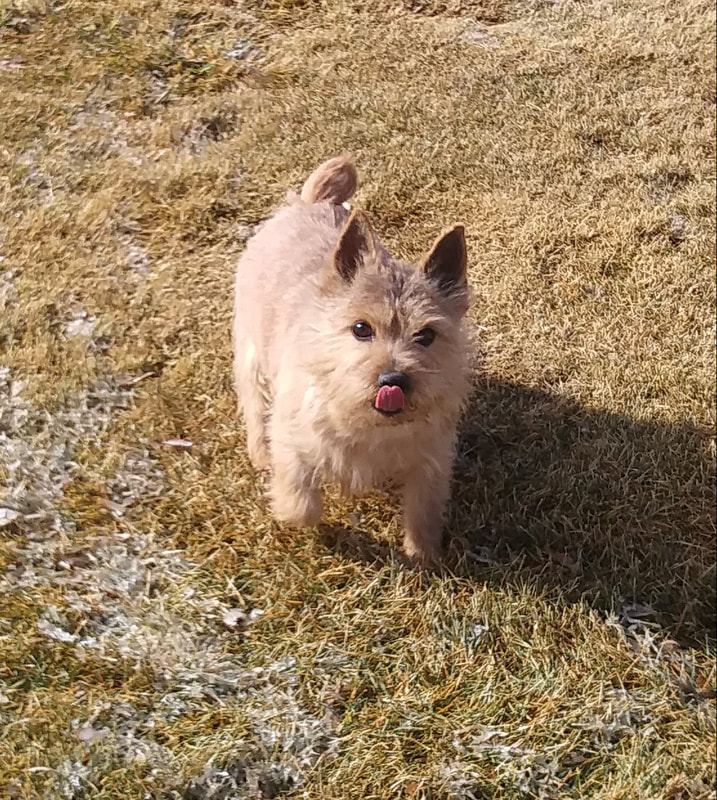 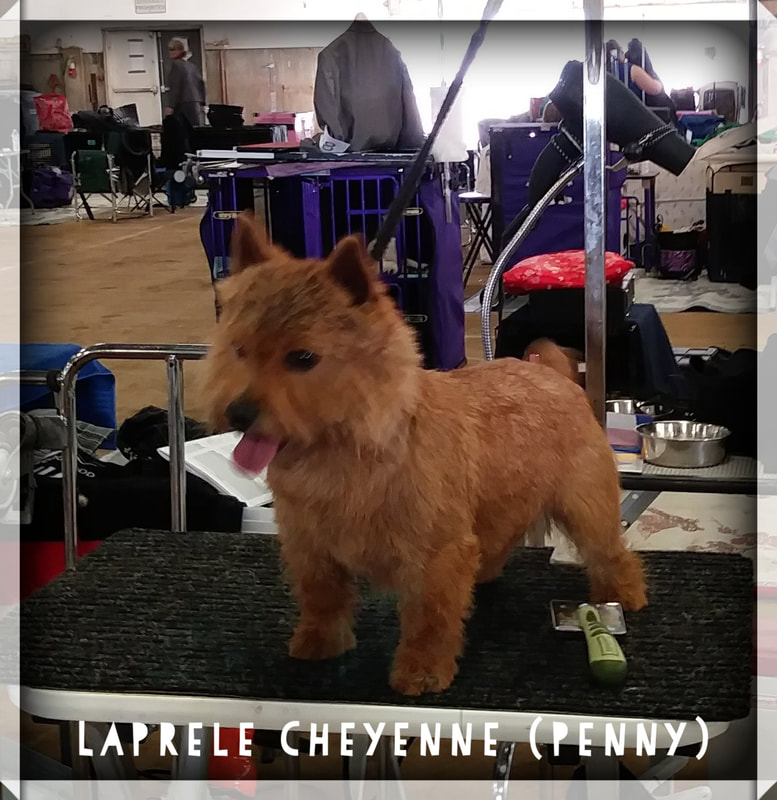 CH Laprele Cheyenne - Penny is a happy, outgoing little girl. She won a 3 point major her first time in the ring, along with a 5 and a 4 point major and finished her championship with two 3 point majors. She will continue her show career in 2021. Penny is our only Uno daughter and a Kate grand daughter. 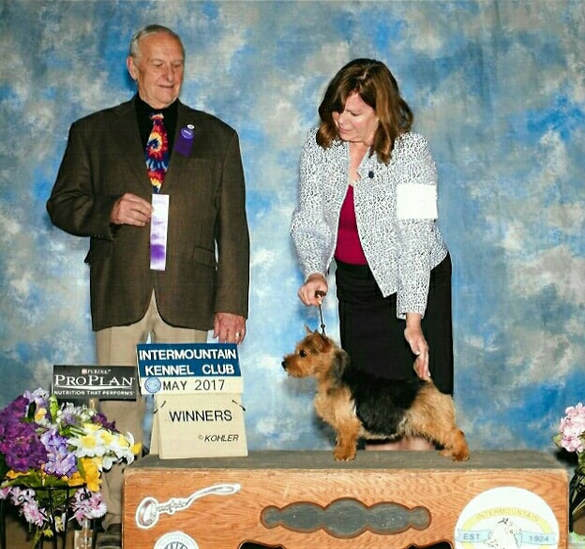 LAPRELE MIDGET
Midget is a very sweet girl. She loves her people and taking care of the other dogs faces so they are clean and presentable. Midget loves to please! Midget is sired by Uno and we are happy to co-own her with her breeder, Edna Grabow. Midgst is retired 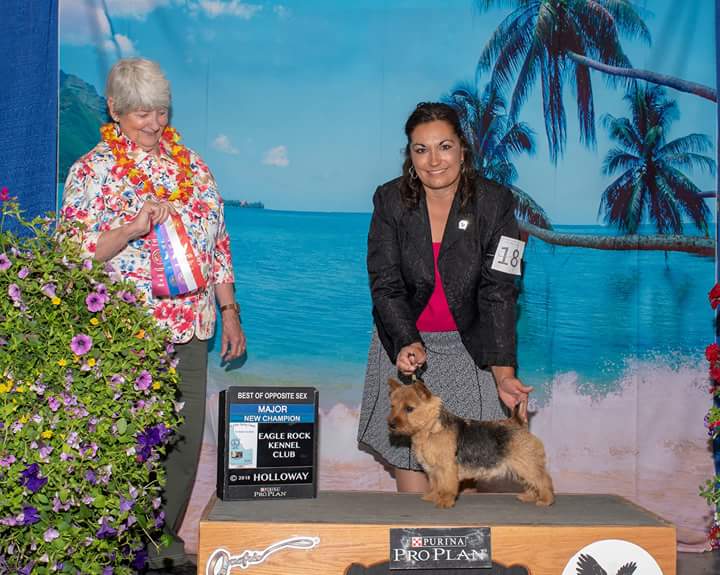 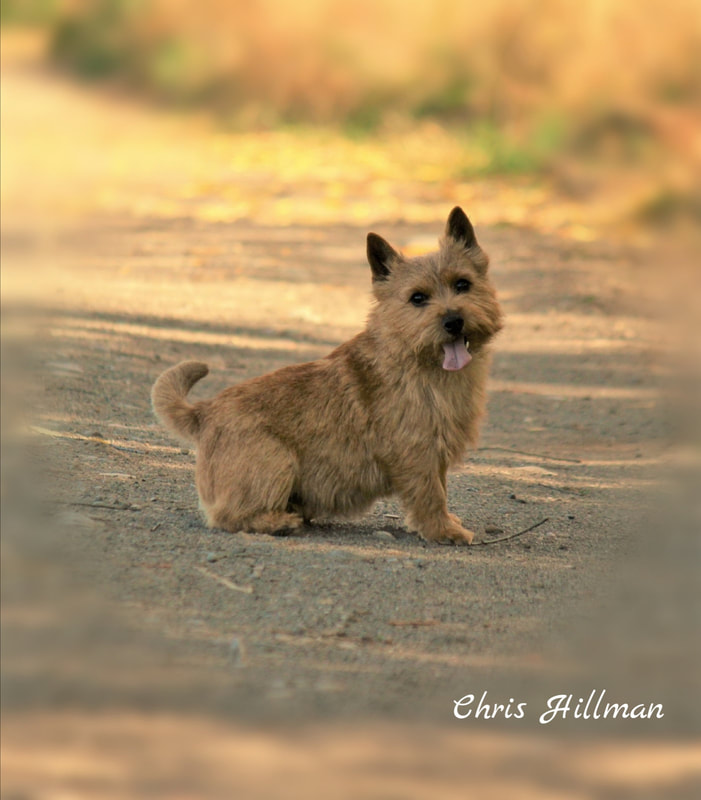 LAPRELE FIRST ENCORE AT FANTASIA - Taffy
Taffy is a happy, sweet, active girl. She is an Uno daughter, and full sister to Penny. Taffy loves to for rides or just hang out with us. Taffy has a beautiful natural tail that really says what she ks thinking. She is very athletic and can jump pretty high for her treats. Taffy is retired
Ch. Fantasia's Magically Delicious (Tory) is Abby's daughter. Tory started her show career off with a puppy group 2 as a 5 month old puppy. Tory earned her first major going Best of Breed over 2 specials and some class bitches in Cheyenne Wyoming from the 12-18 month class. Tory finished her championship with 4 majors in a row! Her last 3 point major was won under breeder/judge Susan Lassila, at the Bonneville Basin Kennel Club in Farmington Utah, September 14, 2013. Tory went on to win the Breed from the Bred By Exhibitor class in Helena Montana. Tory is very happy, and quite the little showoff. She loves everybody, even strangers are her friends, and she makes herself at home wherever she is at. Tory's first puppy, Pickles, has already earned her first Best of Breed from the 6-9 month puppy class. Tory's youngest daughter Rosey, has already earned a 4 point major, and a 3 point major, at the tender age of 6 months. Tory is retired, after having 2 litters. She has given me 2 gorgeous daughters to continue with. 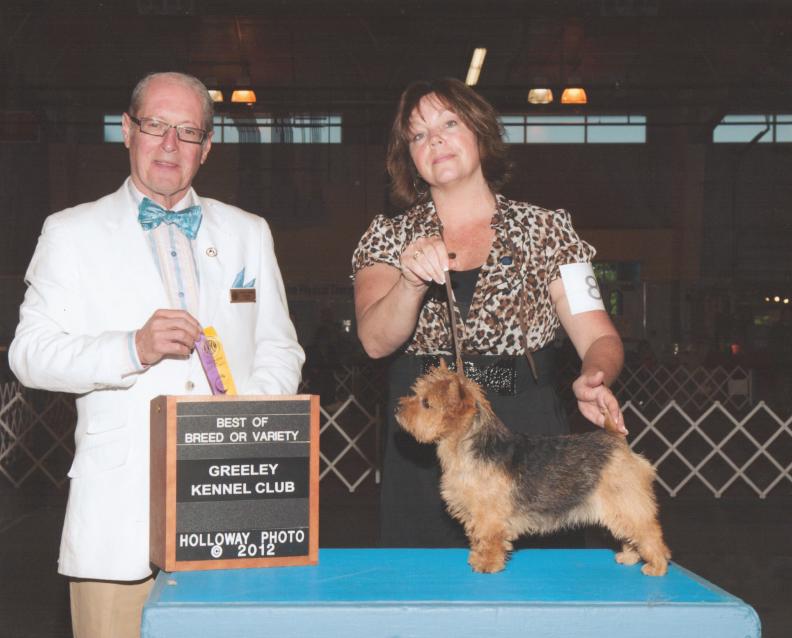 Champion Fantasia's Gettin' Rowdy At Laprele - Pickle
Pickle is a Tory/Tex daughter. Pickle is a bit of a princess, she thinks she is a person. She loves to sun herself or just hang out. Pickle has personality plus without being bossy or busy.
OFA Number Registry Test/Film
Date Report Date Age Final Conclusion LDI=.63; RDI=.68 PENNHIP HIPS Dec 15
2015 Mar 16 2016 21 LDI=.63; RDI=.68 NT-CA332/24F/P-PI
CARDIAC Mar 2 2016 Mar 22 2016 24 NORMAL - PRACTITIONER NT-PA892/24F/P-VPI
PATELLA Mar 2 2016 Mar 22 2016 24 NORMAL - PRACTITIONERCh
Laprele Fire Within Me - Kate
Kate is co-owned by me, and has come to live with our family. Kate is a very correct girl, in her size and conformation. Her attitude is great, she gets along well with everybody and loves the kids. Kate is a Champion producer, she has produced 6 Champions to date, with 2 more to come. Kate is retired, and will always hold a special place in our hearts. Kate is retired, however, I do have a grand daughter and a great grand daughter to continue her legacy. 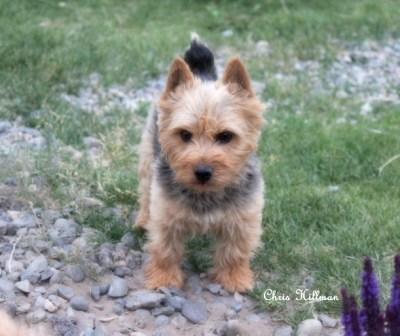 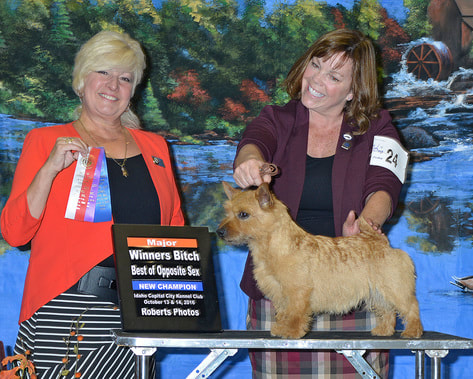 Ch. Fantasia's Fly'N By The Seat Of My Pants - Daphne
Daphne earned her second 5 point major going Best of Opposite Sex over a bitch special at the Boise, Idaho show
October, 2016! This is Daphnes second 5 point major and we are very proud of her.
Daphne was handled by Darcy Bartholomay of Full Throttle Terriers for this show. Daphne is retired.
This is my Abby girl. Abby is an AKC Champion and has 2 Champion daughters (Tory and Wuzzy).  Abby is very outgoing, very intelligent and embodies what a terrier is! Abby for all her energy is an absolute angel, she rarely gets into trouble.
Abby's CHIC number 89185 (for completing the required health testing)
Link to Abby's  and health testing information:
http://www.offa.org/display.html?appnum=1483771#animal
Abby is now retired, she has produced 2 Champions, and has grandchildren that are on their way to their Championship!

Ch. Fantasia's Bear Necessities (Wuzzy)
Wuzzy is Tex's first puppy, she's a bit of a pill as she was an only child. She loves to go hunting with her dad, and loves to chase balls, her favorite is a ping pong ball which she will throw for herself or her smoosh ball. Wuzzy has several Best of Breeds, 2 back to back in Helena Montana, 1 Best of Breed in Sioux Falls (2013), and 3 in Rapid City (2013/2014). Wuzzy also has a Best Bred By Exhibitor, and a Bred By group 2 from the Eagle Rock Kennel Club. Wuzzy earned both her majors in Rapid City (2014) handled by Darcy Bartholomay. Wuzzy is retired. 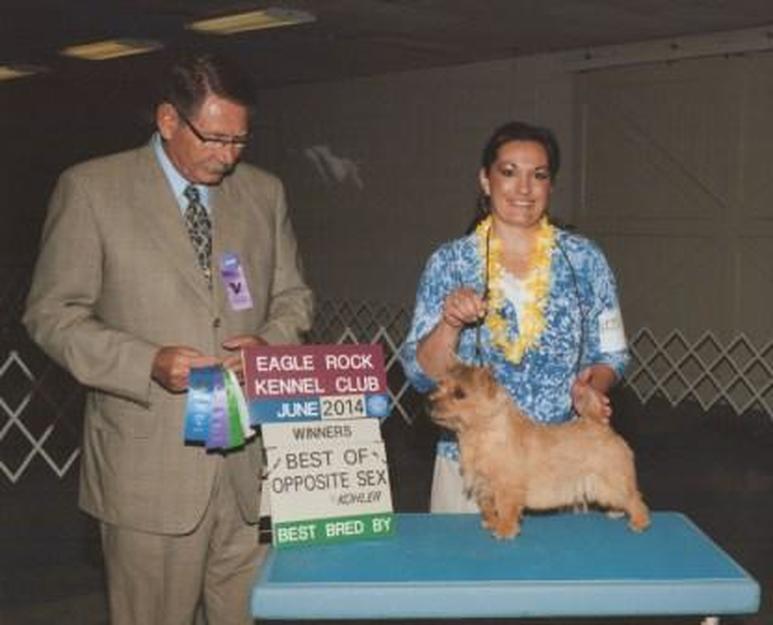 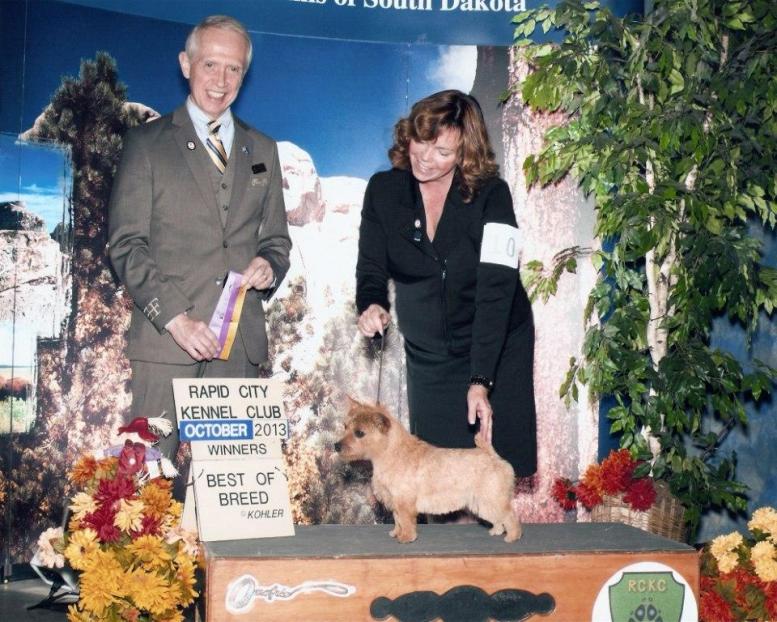 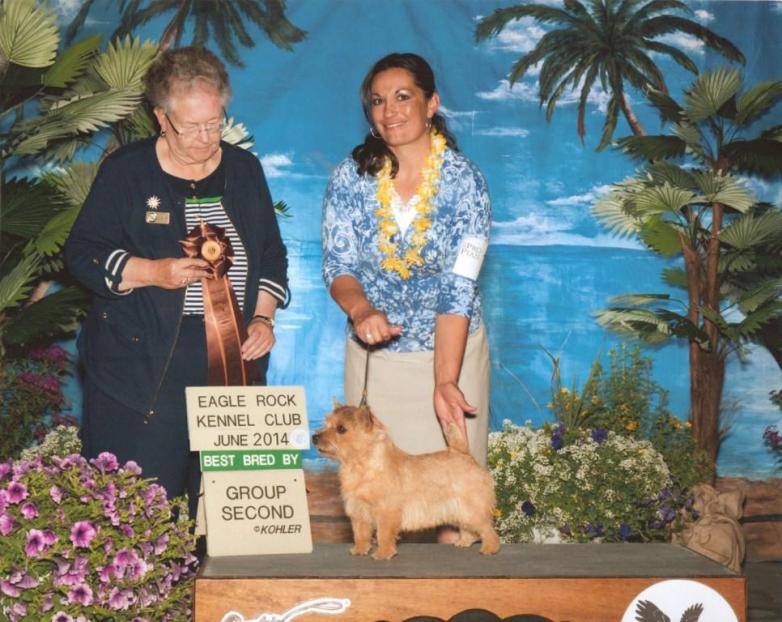 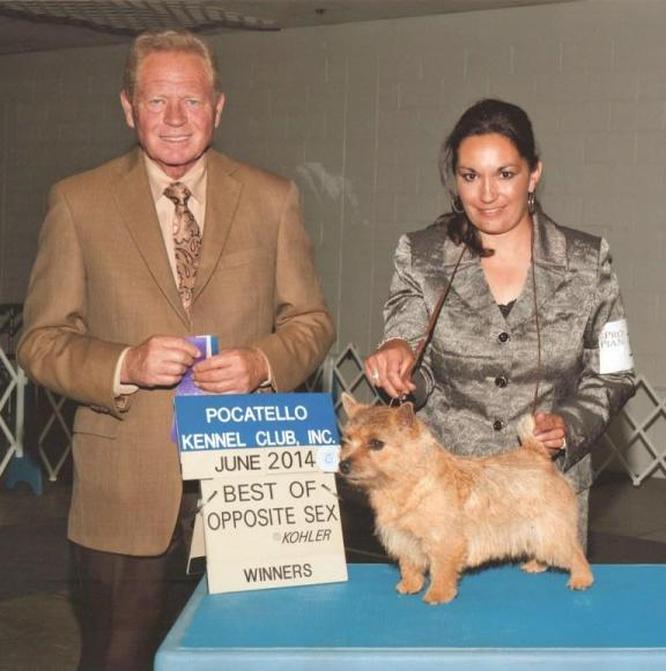